I saw him. He was sat with the child in a chair. I told myself what he was doing was wrong and I should go in and try to take the child from him. Then as I got closer, I saw he was asleep. His hand lay on the child, touching his head. I saw the love in the graceful nature of his hand. I looked at the brightness from him and saw this beaming into the child.

He open his eyes. They were golden, with small bright flecks that saw the universe. He looked at me with a long gaze. He sighed and then he stood and laid the child in his bed. Then he was gone.

I thought of him. This tall, incredibly strong man. There were muscles on him I had never seen before. And then his clothes. I knew them to be clothes people never worn today. His shoes were sandals, like the sandals worn by gladiators. No trousers, only a gladiator skirt. He wore no shirt. Only his arm were covered by light mail, up to the elbow, manicae. I would someday know that it was incredible soft. That was the first time I saw him.

I was terrified. There were explosions. And I had little Aaron to think of. He clung to me and shivered every time an explosion when off. Eventually we were in the bathroom. I hoped they would not look for us here. We hid behind the curtains of the last cubicle. I heard the sounds of army boots, dozens of them, coming across the floor. In a moment they would be here.

I tried not to be petrified but I was quivering inside. I prayed. Oh how I prayed.

He came, shining in so much sunlight even I could not look at him. He came when all things seemed to me darkest. Then in a moment I saw the nimble light go from him towards the soldiers and blind them. He came to claimed me. I thought these thoughts.

Then I was in his arms. And Aaron too. I laid my hand against his chest. I felt my fears disappear. I looked at him, the wonder of him. I knew we were flying. I could feel it on my cheeks and in my hair.

When he landed, he first let go of Aaron.  He put both arms around me. Then he softly began to lower me. I felt the gentleness of his manicaed arms. I felt there warmth against me. I did not want to let him go. Then in a moment I saw his wings. They were an immense black tempest. There was in the tempest an immensity which I was not a part of. There was him and the black tempest, and they were all the same. He closed his wings ever so slowly. He looked at me with his golden eyes and I saw me in them. Then he unwrapped his wings, stepped back and vanished.

It was two years since the attack. Aaron was singing in the way little boys sing. It was the type of song I couldn’t identify. He suddenly caught my hand and he was dragging me into a building. It was music. We followed the music and came into room full of musical instruments. There sat a man, playing the trumpet. Aaron let go of my hand and went closer to observe and listen.

The man played the trumpet as though it was his life. His eyes were closed. Even when he finished, he stayed with his eyes closed. Then he sighed and opened them. He saw Aaron and smiled.

“Do you know any other songs?” asked Aaron.

“Sometimes they come to me and I play them.”

“Would you play some more for me.”

The man laughed. “I will try.” He held out his hand and Aaron took it. And before I could say anything, this man had Aaron sitting in his lap. He was showing him how the trumpet worked and Aaron was interested.

“Lucien”, said a voice behind me.

He turned and saw me. He paused. He had golden eyes. He looked at me. In his eyes I saw me.

In a moment he was up. He looked at and me. He looked at me as though he knew me. Then he gave the trumpet to Aaron and strode across the floor.

I thought of this man, called Lucien, and how much he looked like my Angel. I shouldn’t say he was mine. I never got to call him that because I’d lost him. But he looked like him.

I watched him go. This Lucien who I didn’t know. He looked back at me. And I thought, I want him to come back.

I was in the office. The French priest, incredibly unable to make the computer work, decided I could. It was on the computer and didn’t make sense to him. That’s what he told me. And the last lad had left to go to college. It was not difficult, so I told him. But he did not even look. That was when Lucien came in and saw me. He looked right at me and said, “Aaron, your boy, is really talented.”

“I’m glad. I never thought he would be so good with musical instruments.”

He turned to walk away.

Lucien turned and looked at me. “He is your boy, though you did not give birth to him. I know you care for him and that’s what most important.”

When Lucien left, the French priest said to me, “I see the light in his eyes when he looks at you. I think I see some of the light in your eyes. When you see him go, you think will he come back to me.” The priest left the office and then he turned back. “He will come back to you.”

I was thinking about the past month when he’d looked at me. I was thinking that I’d been dreaming of him. And every time, my heart stood still.

I was stood on a ladder of the children’s home. It was Christmas. I was putting the star on the tree. And I was thinking, I should be putting an angel. And then I was falling. I was falling. Into his arms. Lucien held me so lightly. Lucien caught me. For a moment I was in his arms. I did not want him to let me go.

He lowered to the ground. “You should not be alone when you’re hanging things on the tree.” His hands held me. Lucien did not let me go.

Then he was kissing me. I knew he was kissing and I was kissing him. He stopped kissing me and looked at me with his golden eyes. Then he held my hand that had the star in it. “I should put that on the tree.” But he did not let me go.

I give him the star. And he let me go. I watched him go up the ladder and put the star on the top of the tree.

When he came down, he drew me into his arm and he kissed again. “I will do that every day I live. Will you mind?”

I shook my head.

Then the room filled with people. All the people who came to see the Christmas tree. And Aaron was there. Lucien lifted Aaron so he could see the tree. And with his other hand, he held me close.

I laid my head on his shoulder and my heart knew it was so. 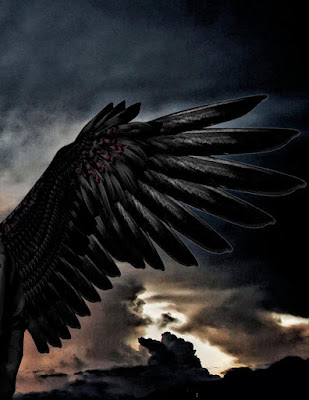