My Year in Books

I’ve done it! Just ahead of my 31 December deadline I’ve finished my final book of the Discworld series. There are 41 books in total so the smallest amount of cheating was involved since I’d already read 16 of them prior to setting myself this challenge. Despite this it was more difficult than I initially anticipated.  Some of the books took longer to read because they didn’t grip me in the way I expected. Because of this I was forced to abandon my desire to reread several of my favourites such as The Wee Free Men. There is however next year for that.

The most unexpected part of this challenge was that I didn’t automatically love every single Discworld novel penned by Sir Pratchett. Happily I loved enough of them to justify this author’s status as one of my favourites forever more. Besides, anyone who co-authors a book like Good Omens is a writing god as far as I’m concerned.

I didn’t only read the Discworld series during this period though. There were several others and there are some corkers in that list such as The Girl Who Saved The King of Sweden & Flowers for Algernon. In total I read 58 books this year.

This challenge has turned my top 5 list into a top 6:

I have no doubt whatsoever that the New Year holds even more extraordinary reads for me to discover. After all, I’m never going to stop reading. 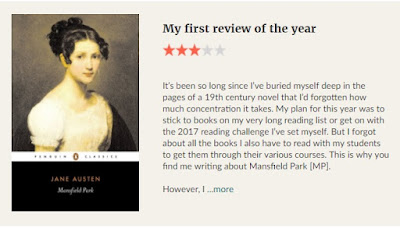 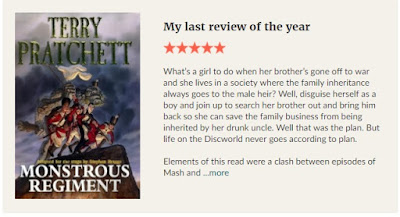 I hope your 2017 reading has been half as enjoyable as mine. Wishing you further reading happiness for 2018.