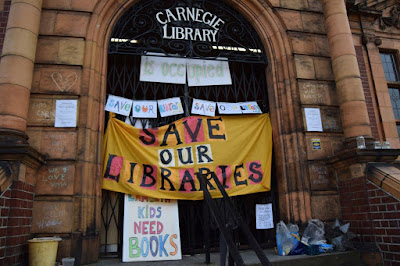 So, Lambeth Council have gone ahead with their plan to shut Carnegie library so they can turn it into a gym.  But they weren’t counting on members of the community fighting back in a style of protest Mahatma Gandhi would be proud of.  Approximately 30 people, including two babies and several teenagers are occupying the library as of this moment.  They have been doing so since Thursday evening with the support of the community. 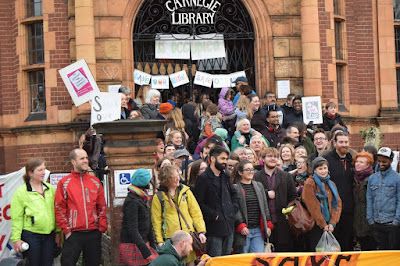 Several Labour councillors have hit back with very personal and cavalier comments about the occupiers.  The most inappropriate of these being the cat tweets by the councillor Alex Bigham.  You can see his full twitter response on Brixton Buzz. 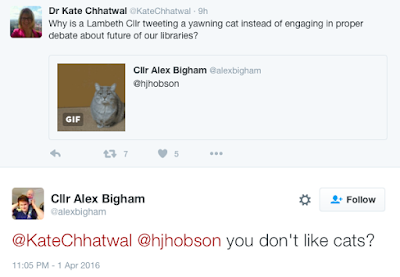 Another complained that the occupiers were quaffing wine during their occupation and had scant feeling for homeless children.  As someone who has personally  housed a homeless person through a project with Centrepoint and donated one of those bottles of wine, I am deeply offended that he would think we are so callous as to ignore the needs of the most vulnerable in society.

The very nature of community is about a feeling of concern and involvement for all.  I’d say the Carnegie occupiers definitely fit this definition.

These disapproving councillors seem oblivious to the fact this occupation is not just about saving a library.   The very people libraries service are the vulnerable.  As a volunteer at Ruskin Readers and a regular user of my library I see who visits it:

So please tell me, critical councillors, how shutting a perfectly good library which supports its community is serving that community?

A great many Lambeth Labour councillors remain silent on the library issue.  I would like to remind them of the Edmund Burke quote 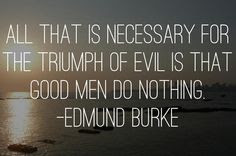 The only other response from Labour councillors are formulaic replies to emails rather than engaging with the people who voted for them.  So Lambeth Labour’s shambolic handling of this situation and no doubt many others has led to a community saying it has had enough.

Tomorrow Ruskin Readers is meant to have a class at Carnegie Library.  At 6:30pm we will be meeting on the steps of the library to find out if Lambeth will let the group in for their regular Monday session.  As yet, Lambeth council has not provided us with a viable alternative venue which meets the needs of our members.

Onward to day 5 and beyond l say.  And I, for one, will be providing any sustenance I can for the occupiers. 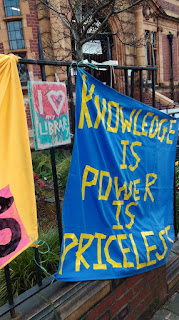