Adult Literacy at Carnegie Library is on the eve of its 41st Birthday in May 2016.  Despite this astounding legacy, Lambeth Council’s decision to close Carnegie Library on 31st March now threatens this heritage.

Ruskin Readers provides one to one tuition for adults with special learning difficulties using trained volunteers, under the guidance of a Supervising Tutor.  It operates out of Carnegie Library free of charge (nor does the club charge for its services).  Carnegie’s friendly and supportive atmosphere, its complex of rooms, large and small has been the ideal location for the club’s needs.  Over the years, it has been a venue which has generated considerable affection from tutor and volunteer alike; an affection which has been sustained and nurtured to this day.

Founded as Amity Reading Clubs in 1977, the Adult Literacy club became Ruskin Readers in 2006.  While it is independent of its founder members, Ruskin Readers maintains the ethos developed when adult literacy was very much at the forefront of public consciousness.

“On the Move” was scheduled on the BBC at peak times on Sunday evenings and the government had funded a new adult literacy initiative - Adult Literacy Resource Agency (ALRA).  Education authorities up and down the land were looking for ways to contribute.

The community served by Carnegie Library and hence Ruskin Readers, is mixed, both in terms of ethnic diversity and economic vitality.  In short, neighbours are Brixton and Dulwich.  But the club’s catchment area spans the full range, even as far away as Clapham and Thornton Heath.

Over the years; the club, first as Amity and now Ruskin Readers, has tutored literally hundreds of students at Carnegie.  The very nature of adult literacy requires commitment to a long-term programme of learning.*  One of the students has nearly twenty years of service and several others have been working with the club for more than ten years.  In terms of age span, students range from mid-thirties to eighty-six.  The bravery, commitment and dedication of these students is awesome.

Local volunteers have been as diverse as the students, with much the same age span.  Here too, several volunteers have given over ten years’ service. One in particular; Daphne Ernest, served for twenty years before becoming mentor to the current Supervising Tutor.  This is yet another reflection of the strength of commitment the Amity approach brings to students and volunteers alike.

Today at Ruskin Readers, one to one tuition is still the cornerstone of their approach.  However the range and quality of tuition material available is vastly improved and growing every day.  New technology too, has had a dramatic impact.


Caroline Knapp (Supervising Tutor) had this to say, “Laptops and literacy software are now readily available to students and volunteers, and powerful tools they are. Our work today is also enhanced by the trappings of a constantly changing art gallery at Carnegie, with all the stimulus that such an environment brings.  Internet access is an added bonus.”

This is by no means the first time the existence of the strong commitment to adult literacy has been threatened by Lambeth Council.  Problems created by a backlog of overdue maintenance are well known.  From time to time meetings had to be cancelled for Health and Safety reasons.  And for a period of nearly a year, the club was relocated.  The room allocated bore more resemblance to a furniture store than a teaching venue.  At other times, like NOW, funding pressures threatened the use of the building.  Thankfully common sense prevailed due to the successful campaign by the Friends of Carnegie to save the building for public use, and bring it back into a proper state of repair and decoration.


Ironically, at the start of this academic year, Ruskin Readers received a Grassroots Grant from Capital Community Foundation, Lambeth. This money has enabled the club to buy useful books, reproduce tutor manuals, up-date laptops and CD players. They have forged strong links with Dulwich Picture Gallery and increased visits to theatres and other educational venues for the benefit of students’ wider cultural education.

Despite constant communications with allocated councillors about Lambeth's plans for Carnegie Library, Caroline Knapp has no information (other than generalised emails) on whether the Literacy club will be rehomed.  And this, days before the planned closure.

In short, after twenty years of neglect and dwindling funding, adult literacy skills in the UK are worse than ever.  And Lambeth Council is aiding and abetting this crime to society by shutting the public out of the library (a much loved and valued public space).


Where are the values of Labour in all this?

Why is a Labour Council not adhering to its own party’s key points?

How exactly are the interests of the most vulnerable being supported by the closure of Carnegie Library?


*The Moser report of 1999 “A Fresh Start – Improving Literacy and Numeracy”, states, “It is estimated that around 7 million adults have poor literacy skills.  This means that one in five adults reads and writes less well than an average 11 year old.  An even greater number have poor numeracy skills”.


How can you help? 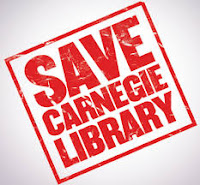 Information for this blog post has been taken from an article by Phil & Gladys Glascoe.  More recent details are from the current records of Ruskin Readers, held by Caroline Knapp.